If you’ve read my books then you know I love to add food to the scenes. It’s such a nurturing element, plus it adds certain nostalgia.  Autumn Moon is Elen and Cormack’s story.  I’ve put this couple through quite a bit, and this is the story where they finally get together.  Elen was the only person to offer him a welcoming home while he was trapped in wolf form, but he’s spent some time away to learn his new human form.  Now he’s a man and has returned to protect the woman he loves.  Elen and Cormack are learning  each other for the first time with hearts that are already bound.

The first thing Elen’s bakes for Cormack upon his return is pumpkin muffins, and it was such a fun scene to write, and emotional in many ways if you know their backstory.

Cormack formed an intimidating figure as he marched beside her with graceful strides. His sword swung from his side, the belted scabbard hanging low off his hip, with his eyes sharp and searching for potential threats.

He’d left her as a gentle friend but returned to her as a warrior. And why did that make her stomach flutter as if a thousand butterflies danced to his song?

A question for a later time, Elen decided for her own peace of mind. And after inhaling a deep breath for composure, she tactfully changed the subject. “Are you hungry?” It was still late morning, so she offered, “I can whip us up some coffee and muffins.”

He sighed as if relief was a weighable substance and she’d just removed a boulder from his chest. “I would like that.”

“Apple muffins?” she asked. “Or pumpkin?” The trail opened to her grain fields, and she hurried on, anxious to cook for someone other than herself again. Ms. Hafwen didn’t count because she was too particular toward sweets and only ate crumbs she deemed worthy.

He thought about it for a moment. “The pumpkin ones with the white crunchy stuff on top.”

“Streusel,” he said, testing the word on his tongue. “Make extra.”

His smile was infectious. “I can do that.” As they made their way through rows of apple trees with low branches heavy with ripened fruit, she had a ridiculous urge to giggle. It seemed she had little control over her emotions around him; one moment she wanted to cry, and the next she acted as if she’d never been with a man.

Which, of course, she had. But not one who held her heart so firmly in his grasp.

“What’s so funny?” He kicked a fallen apple out of her path.

“Truly, it’s nothing.” Only the fact that hearing him talk back would take some getting used to, but she didn’t think he would appreciate her humor on the subject, not so soon after their last bout. “I’ve never had to answer your questions before.” She snuck a peek at his profile. “Or received answers to mine. I like it.”

She stubbed her toe on a jutting rock because of that grin. His mouth was made for pleasure. Thankfully, she caught herself before falling on her face in more ways than one and made it to her cottage without any further embarrassments.

Unlatching the wrought iron gate that led to her front portico, she announced, “We’re home.” The sentiment spilled naturally because she’d said it countless times over the years. However, she’d never once heard him repeat it back as he did just then.

“We’re home.” He inhaled a deep breath as if to savor its scent. 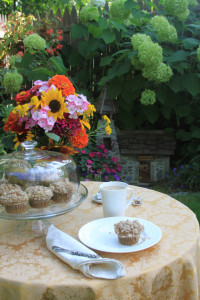 Instructions:
Mix ingredients with your fingers until it resembles coarse crumbs and set aside.  This streusel freezes well if you wanted to make a double batch and save for later muffins.

*All ingredients should be room temperature before mixing!

Instructions:
Heat oven to 350 degrees and line a regular dozen muffin tin with cupcake liners.  You can spray or grease the pan, but liners make cleanup easier. Sift dry ingredients into a bowl and set aside.  Beat butter in a mixer until creamy.  Gradually add eggs and sugar.  Add buttermilk, vanilla, pumpkin puree, and molasses while continuing to mix.  Finally, gradually add your dry ingredients until blended.

Scoop batter evenly into the muffin tins.  Add streusel on top of each muffin.  The muffin’s tops will expand so don’t be afraid to pile the streusel.  Bake for 25-30 minutes, or until toothpick test comes out clean.  Makes twelve muffins. Enjoy!