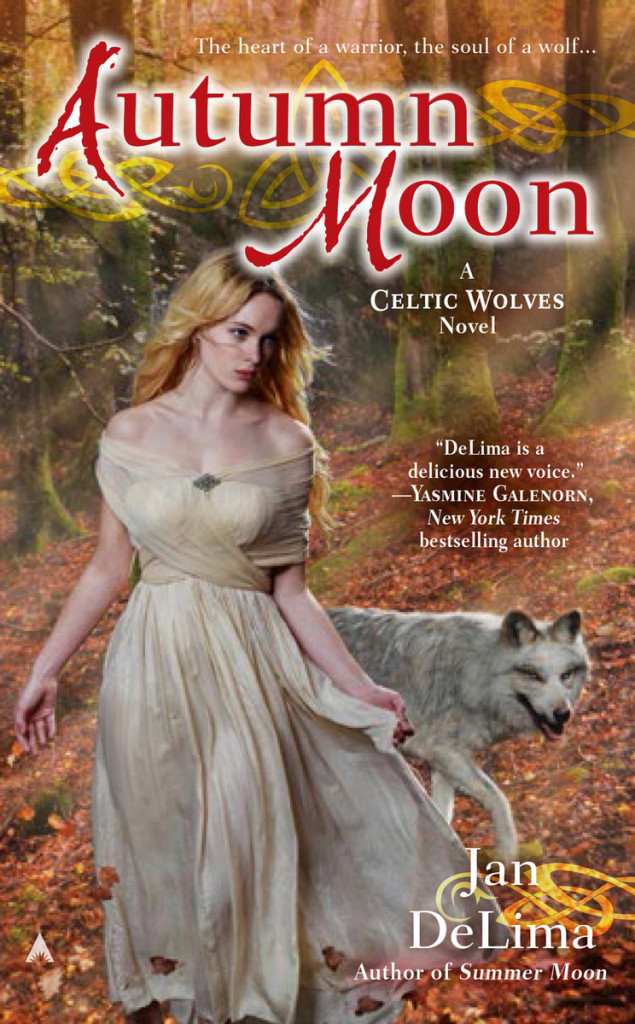 The heart of a warrior, the soul of a wolf, and the desires of a man

For centuries, Cormack has lived between worlds—a man trapped in the body of a wolf, shunned by humans and shifters alike. Only one person has ever welcomed his company: Elen, a kindred outcast who is feared by others of her ancient Celtic race for her strange healing abilities. Cormack has always valued Elen’s kindness and understanding, but after a desperate act of friendship causes Elen to free him from his curse, he realizes he wants more. He wants all of her—completely and forever.Except before Cormack can win Elen’s heart, Pendaran, the evil leader of the Guardians, captures her, determined to manipulate her incredible power to aid him in his twisted war against the shapeshifting tribes. Now Cormack must use all of his skills as a warrior and a wolf to save the woman he loves—before Pendaran’s vile schemes destroy them all…

The gathering room was Elen’s favorite place in the cottage. None of her furniture matched, and shelves lined the walls, filled with worn and well-loved novels of every genre. Her living plants remained outside in the garden, where they belonged, having been contained over the summer. Herbs hung from the rafters in bunched bundles as they dried, adding an earthy scent of lavender, rosemary and sage.

It was her cluttered and eclectic haven. A central stone fireplace separated the sitting area from the kitchen and provided heat and comfort. She often prepared remedies in the cast-iron kettle that hung from the chute over the flames. There was something about kindled fire, wood smoke and iron that set the potions better than any modern stove.

Even now, thanks to Cormack, a fire crackled in the hearth, taking the night chill out of the air. They had spent many hours in this room together, snuggled by the fire while she read to him. Her sofa was a recent splurge, overstuffed and covered in soft velour and she sighed with pleasure as she curled her legs under a knitted throw and savored this time.

“I love this room,” Cormack said, echoing her thoughts. He had changed into a green shirt that tapered loosely to his waist and jeans, but she remembered all too well the body those clothes hid. He’d been glorious when he’d stripped by the falls; his stomach kissed by the afternoon sun, his shaft thick and heavy between his thighs. He was comfortable in his human skin.

He filled the room now with the same assurance, relaxed and at ease. While her skin felt tight and antsy, sensitive to touch under a tank top and cotton pajama bottoms over lace panties. She’d left off the bra, too stimulated to deal with the extra friction.

With a glass of red wine balanced in the palm of one hand, he twirled the dark liquid before taking an unhurried sip, closing his eyes as the taste hit his tongue. I belong here. That was the message he projected. Her wine, her glasses; it was his as much as hers.

And it cast a feeling of rightness in her chest so deep it physically ached. If he’d placed the hilt of his sword on the coals of the fire and then held it on her skin, she’d be no less branded. Some marks remained unseen.

“You’ve been raiding the wine cellar,” she managed to tease without betraying her thoughts.

Grinning without shame, he asked, “Would you like a glass?”

She shook her head. “Maybe later.” In her current condition, anything that impeded judgment posed a dangerous prospect.

Walking along the nearest bookshelf, he ran his free hand over the spines, pausing at a tattered volume of Jane Eyre—one of her favorites, but not his. As a wolf, he would fall asleep when she read it. His interests leaned toward action and suspense novels. He removed the book and placed the glass on the trunk doubling as a coffee table, sat down beside her and drew her legs up over his lap. An intimate gesture, but comfortable because of the memories formed in this room.

And then he began to read, and she was lost in the deep timbre of his voice. He hesitated at times to decipher certain words, but for the most part recited the verse with steady and determined cadence.

“You’ve learned so much without me,” she whispered as he paused to turn a page. Her interruption ruined the magic of the moment, and she instantly regretted it.

His chest rose and fell with a sigh. He closed the book and set it next to his glass. “Elen—”

“Forgive me,” she blurted. “I should never have brought it up again.” To reassure him, or perhaps herself, she leaned forward and placed a chaste kiss on his cheek. “Please continue reading. You’re very good at it.”

His skin was smooth but not soft, she noted during that brief moment of contact, and his scent lingered in the air around them, a meld of midnight breezes through whispering pines. And because it belonged to him, it reminded her of honor, and selflessness, and incredible will. And it would haunt her with hunger for the rest of her days.

She offered a smile, but humor didn’t lighten his mood—or hers for that matter. If anything, it became heavier as the questions she’d avoided lodged in her throat, burning for answers.

His hand lifted and covered his cheek where her lips had been. “I haven’t learned everything.” His voice was quiet, and if she’d been mortal, she may never have heard his confession. “That was the first time I’ve felt lips on my skin.”

There were times in Elen’s life where she’d been stunned to silence. Hundreds, she suspected, were she to waste her time counting. A certain moment at the falls came to mind. And had she not been ripped of her spirit less than four days prior? But his admission left her mouth hanging ajar like a child at her first fair—and he was the candied apple waiting to be tasted. “You’ve never been kissed?”