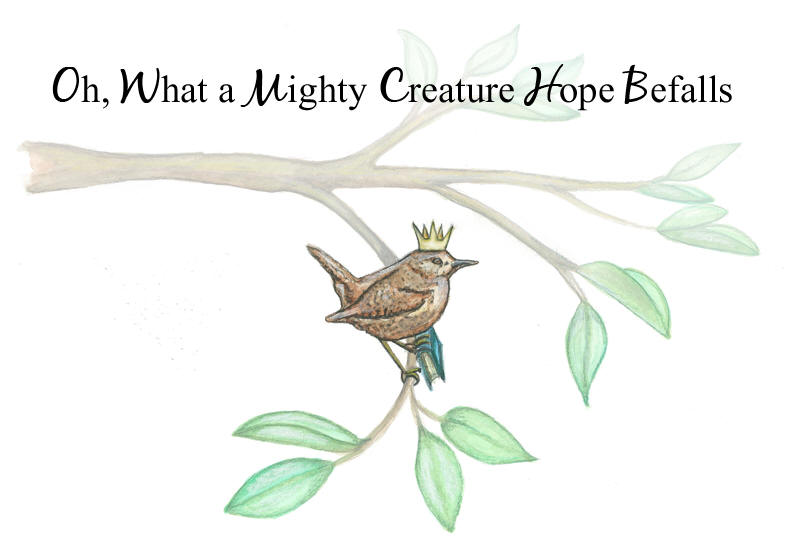 ELEN BROKE GROUND WITH FEROCIOUS JABS OF HER SHOVEL. Sweat pooled on her spine and her arms throbbed but she continued the task, needing the mind-numbing escape of planting a tree and not thinking about Cormack.

Or the fact that he had snuck out of her room before dawn—and then refused to return with her.

Something flowering was in order, she decided. A lilac perhaps, because it had been a vexing few days and nothing made her feel better than a tree that blossomed every year to remind her that life also brought peace and beauty and not just turmoil and ugliness.

A bird flitted about, landed on a branch of a nearby apple tree, turning its head sideways to watch her work. It was a winter wren, small and perky, with brown-and-white-striped wings and a creamy white throat under a dark beak.

Odd, though, how the top of its head glinted gold in the sun.

Dropping her shovel, Elen approached slowly for a closer look. Eye level, the wren lifted its chin in a haughty gesture. It held a square object in its left talon. The glinting bit on top of its head looked very much like a crown, an actual one of gold and not yellowish feathers.

Elen stilled, for this was no usual bird. The energy that reached for her was greater than the entirety of a healthy forest. “Should I welcome you to my garden, or should I be afraid?”

A glimmering cloud whirled around the wren to reveal a tiny woman with iridescent dragonfly wings edged by dark brown veins. She was lovely by human standards, but rather plain for an extraordinary creature; her coloring matched the bird, with creamy skin and striped brown hair, curled short and tucked under her coronet.

Elen blinked, squeezed her eyes shut and opened them again.

The woman with wings remained.

“What are you . . . a faery?” Not the most intelligent inquiry—but she was surprised and therefore deserved some lenience. A sighting of the wee folk hadn’t occurred, as far as she knew, since before the Guardians were given the ability to transform to wolves.

The woman lowered her tiny chin and issued an indignant glare; it was far more disconcerting than her size should allow. “We have much work to do if you cannot even tell the difference between a faery and a pixie.” Like a wren, her voice came out in piercing overtones and was clearly amplified.

“You look disappointed. What were you expecting? Pink hair and sparkles? Beauty comes in many forms. And mine, you will learn, is knowledge.”

“Now you lie,” she clipped. “And I tolerate lies even less than stupidity.”

After receiving two scoldings in under a minute, Elen became less enchanted. “What are you doing here?”

“I am your new teacher, Elen.”

“What are you going to teach me?” She had a doctorate from Harvard and had apprenticed under Maelorwen. She could perform modern surgery and turn a man’s stick as soft as worms. But she was always willing to study new things, especially from the Fae.

“Our kind has given you a powerful gift.” A delicate snort carried. “You must learn to do more with it than run rivers of moss and force transformations, especially if you are to fight the darkness that wants you. And you must learn to control it.”

“There’s a darkness that wants me?”

“To be sure, but we will get to him later.” The pixie hovered before settling into a cross-legged position on the branch. “First, let me introduce myself.” Apparently, the item she held was a miniature-sized book. She flipped the pages, searching. “I found two books of use to me in the library of Castell Avon: Etiquette for Travelers and Oxford Dictionary of Modern Slang. I had them transcribed to my size,” she explained while tilting her head over what she read. “It says here that teachers of this time and culture are assigned a prefix before their name of Miss, Mrs. or Ms., depending upon marital status. My personal relationships are none of your concern, so you will refer to me as Ms. Hafwen. Do you understand?”

Elen could only nod.

“Good,” Ms. Hafwen said. “Now, I will need a home, because it is inappropriate for a student and teacher to reside in the same dwelling.” Her wings began a whirling motion before she lifted off the branch and hovered around Elen’s garden. “You will build this home for me out of stone, mortar and wood.” Her voice carried sharp in the wind like a bird’s song. “Nothing elaborate; one turret, a window and a door is all I need. “Here,” she announced, “under the hydrangeas in your shade garden.”

“Okay,” Elen agreed when pinned with a glare.

“It is my understanding that okay means yes.” She waited for verification.

Still, the pixie hovered as if expecting more.

She gave a nod of approval. “Thank you, Elen. You will build it today.” She flipped another page of her tiny book. “You and I have much to do. There is an axiom I found . . .” She flipped yet another page, pursed her lips, paused and frowned over what she read. “Mother fuc—” Inhaling a sharp breath, she caught herself before finishing the crude but common saying, and then gave an indignant sniff. “That is disgusting!”

Elen laughed; she couldn’t help herself.

Ms. Hafwen huffed, “I do not know what it is about humans and their fascination with inbreeding. That was not the modern adage I wanted. Where is it . . . ? Ah, here it is: Work your arse off.” She gave a satisfied smile. “I like that one.”

Why did Elen suddenly feel as if her quiet world had just started to spin like a merry-go-round and she needed to hang on or be thrown off?

“Elen,” the pixie announced with glee, “you and I are going to work our arses off.”

The way Ms. Hafwen pronounced arse rather than ass ruined the impact—but Elen dared not contradict this formidable creature.