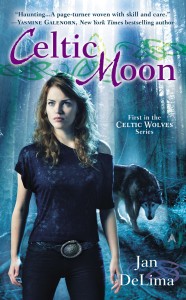 Celtic Moon is now available! It seems so surreal to finally type those words. As many of you know, the path to publication is not easy. When I was first learning How to write a book, I loved what I was doing but it took me a while to ge tthe hang of it. For me, it took six novels and ten years, but I am grateful for the opportunity, and for the journey that has brought me to this wonderful place. I hope you enjoy the adventure as much as I enjoyed writing it.

This week has been filled with several heart-warming moments, a few of which I must share. Yesterday, the Bangor Public Library hosted my very first book signing. All proceeds from this signing were donated to the library. My publishing house (ACE/Penguin) graciously donated books for this event. Honestly, I had not expected to go through them all, but am so thrilled to announce that the library sold every single one and raised almost eight hundred dollars.

I have fond memories of this library, having worked there for many years. I have since retired, but over the years patrons have given me grape vines, perennials, herbs and garlic, because they knew I loved to garden–and enough recipes to create a cookbook. If I mentioned my overrun zucchini plants I would have hand-written recipes using zucchini given to me throughout the day. I’m smiling now as I write this next tidbit, because I once blogged about the increased popularity of erotic literature, and I had some interesting titles secretly appearing in my box and on my desk from patron’s private collections. I sometimes wonder just how well versed they were as individuals – had they seen an escort hamburg service before? Still, I remember organizing a writing group for teens, their enthusiasm and creativity, and later, a published book from one of the members. A co-worker and I co-founded a book group that was featured in a cover story of the Library Journal and was awarded a grant to buy ereaders for all its members. Later, I was thrilled to watch that same co-worker accept the RWA’s librarian of the year award.

Having my first book signing in a place that has brought me such joy was the perfect way to launch my debut novel! I will admit it was somewhat strange to be sitting on the other side of that desk. 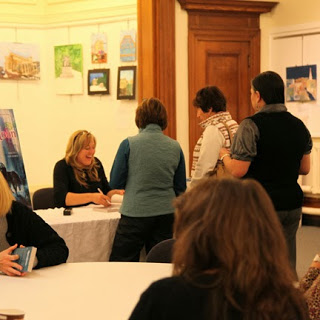 My first book signing at the Bangor Public Library. 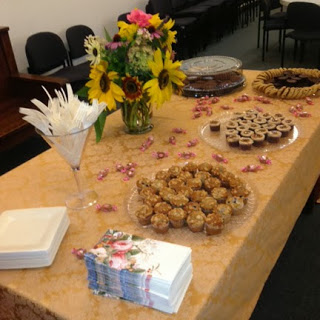 And what’s a book signing without coffee and sweets?

So, to everyone who came to the library to buy a copy of Celtic Moon—THANK YOU! I truly appreciate your support. I will leave you with a quote from the Library Journal because I think it’s fitting. The quote is from me, about this library, its patrons and readers, and our shared love of books.

One summer night DeLima was struck with how little things have changed as she and her colleagues were locking up after a long day at the library. “Our book group members had moved on to the front lawn and were still laughing and talking about their favorite reads–this diverse group, patrons of all ages and lifestyles, had found a common joy,” she says. “Whether we download to an ereader or read the traditional way in paper and print, we still want to share our love of books with others.”

I am beyond excited to share with you the cover of Celtic Moon, my debut novel and the first book in my urban fantasy series. It will be available September 24, 2013!

Before I share what I love most about my cover, I must send out a giant THANK YOU to the entire art team at Berkley/Penguin for creating such a beautiful representation of my story. I couldn’t be more pleased!

Without question, the woman is stunning, but even better, she’s wearing normal clothing. How cool is that? This works for my heroine because she is a practical woman and a mother of a teenager. For survival reasons, she wouldn’t wear anything that might attract attention. Sophie has quiet strength, forced by circumstances to become the person she needed to be to protect her son. I think they did an amazing job illustrating the general feel of her personality.

Also, the setting of my story takes place in an isolated town in Maine, in an environment conducive to wolves. The background is so accurate it’s surreal, as if I could just dive into the cover and find myself in our Maine woods, only with a beautiful wolf waiting to greet me. (The wolf happens to be the father of Sophie’s son. He is also an immortal shape-shifting Celtic warrior and just as lovely in his human form.)

Overall, I think the cover is wonderful and it represents the atmosphere of my story well.

Now, I can’t wait to see what they come up with for book two!  I have a river castle in that one, a tattooed hero, and a heroine who carries a sword.  It could be interesting!

Description on back cover of Celtic Moon:

Sophie Thibodeau has been on the run from the father of her son for more than fifteen years. Now her son, Joshua, is changing, and her greatest fears are about to be realized. He’s going to end up being just like his father—a man who can change into a wolf.

Dylan Black has been hunting for Sophie since the night she ran from him—an obsession he cannot afford in the midst of an impending war. Dylan controls Rhuddin Village, an isolated town in Maine where he lives with an ancient Celtic tribe. One of the few of his clan who can still shift into a wolf, he must protect his people from the Guardians, vicious warriors who seek to destroy them.

When Sophie and Dylan come together for the sake of their son, their reunion reignites the fierce passion they once shared. For the first time in years, Dylan’s lost family is within his grasp. But will he lose them all over again? Are Joshua and Sophie strong enough to fight alongside Dylan in battle? Nothing less than the fate of his tribe depends on it…

“I’m going for a run,” Dylan said, taking off toward the woods.  His people had wronged Sophie.  He was convinced of that now.  And still she had come home to him, of her own free will—for their son.

His wolf clawed at his spine for release. Its fury, its need—its desire for the woman who’d had the courage to return for their child was no longer controllable.

Perhaps it was a good thing Sophie hadn’t invited him to stay, Dylan thought as he entered the forest, ripping off clothes as he walked. For if she had, he wasn’t sure if he could have controlled his hunger.